While pondering the resurrection of this blog, I went through all of the archives and found some of my favorite posts.   I thought it would be appropriate to revamp them a little and post them again in honor of my original mission. So here is the first in a series I like to call Retro Recall.

I should have known better than to pick this damn thing up, but I just couldn’t resist.  It was gaudy enough in itself, with the oodles of roses and all, but then I saw it.  The sludge.  Notice the dark yellow at the bottom of this thing.  And the ghostly floaty cloud.  Yep.  That there is a cloud of coagulated goo.  Apparently by picking it up, I had awakened the slime creature of the deep.  So I did that most of us would
have done, and I shook it up. 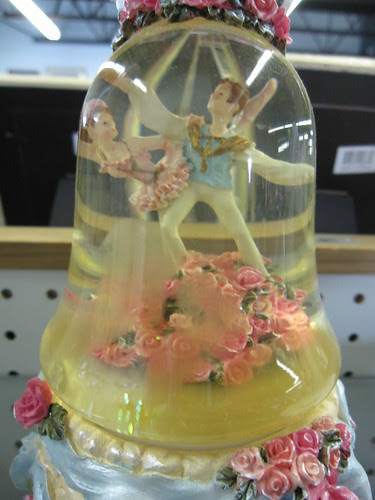 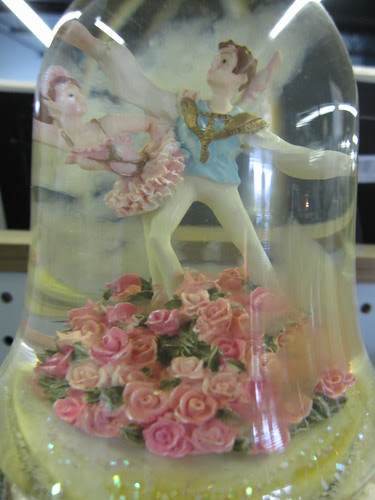 Ugh. That sent clouds gelatinous muck floating all over which, in all honesty made me gag a little.  (shudder)  Seriously?  Why is this for sale?  Find me one person who sees this and says “OMG!, Floating chunks of mucus!  and ballet?! I have been looking for one of these, Score!”

Posted by Carmen@Thriftstorehorror at 12:47 PM 4 comments:

Sometimes, there are no words.  But there just might be a song. 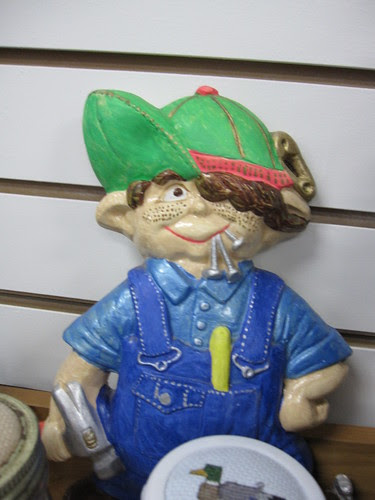 Posted by Carmen@Thriftstorehorror at 10:30 AM No comments:

Ahh, what a great way to spend a Friday night, playing games with the family.  For tonight's festivities, let's start out with a rousing game of... whoa, wait, is that a forest fire?  What on earth is playful about the destruction of acres of natural habitat!! 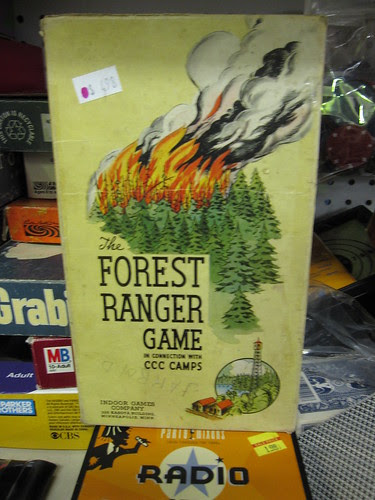 Just so you were all aware, this game belongs to Jarrold.  Apparently our friend Jarrold is not ashamed to admit he likes to play with fire.  Shame Jarrold.  Shame. 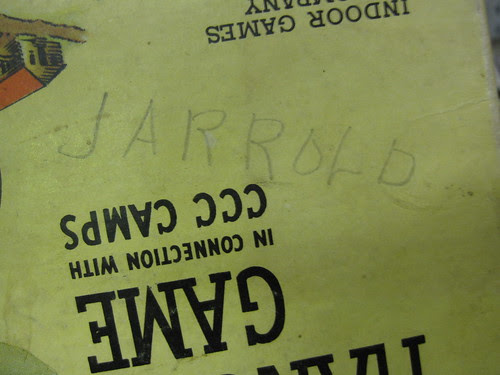 Alrighty then, that's enough destruction for one evening. I vote we move on the to the next game.  Let's play some... oh my.... 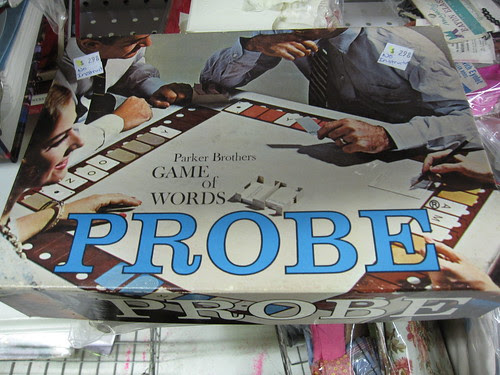 And visions of alien abductions danced through their heads.  I believe it is best if we just keep moving forward at this point.  How about we change things up and sit down for a nice little game of... oh for crying out loud.  I give up. 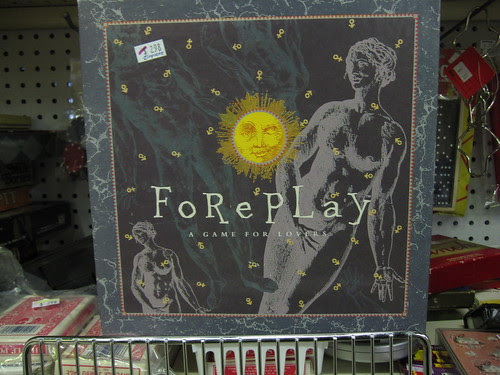 I don't know what kind of crazy ass game night you people play around here.  I think it's best if I just go home, crack a beer and watch television, thank you very much.

Posted by Carmen@Thriftstorehorror at 10:17 AM No comments:

It's Time for Fun Clown Facts with Carmen


If you were a previous reader of this blog, or know me personally, you will know that clowns, (like dolls) creep me out.  They always have, but a trend in horror movie clowns hasn't exactly helped.  If you've watched Zombieland, you will know what I mean. 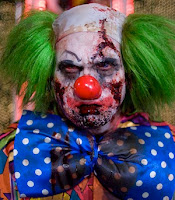 By the way, in case you didn't know, even the CDC has a plan for a Zombie Apocalypse preparedness planning!! You just never know!  Anyhoo, I was talking about clowns, not zombies.  Clowns... creepy ass clowns... so as far as I'm concerned, Happy Jack can take his clown skits and... well, I'll leave where I'm going with that one to your imagination, but suffice it to say, clowns are bad enough.  The idea of them doing skits....for everyone.....is all kinds of wrong.    (p.s.  I'm sorry if you are a clown by trade and are offended by my opposition to clowns.  I think it is a familial trait as my brother feels the same way.  I'm sure you are perfectly delightful people, I just would prefer to talk to you when you AREN'T being a creepy ass clown). 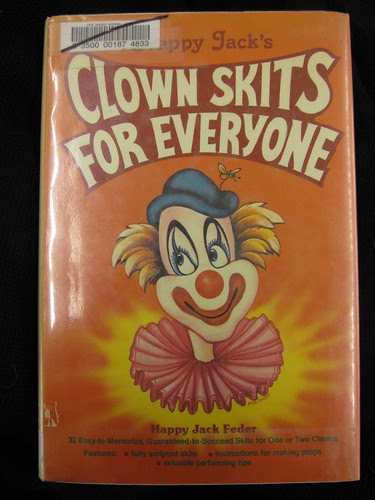 I know there is a number of people out there who think that those of us with clown phobia (fun fact: did you know that there is actually an ICD-9 code for a diagnosis of a fear of clowns?  It is called  Coulrophobia. Yup, I just learned something.  That's your Public Service Announcement for the day.

Back to clowns, why are they so inherently creepy?  I'm not entirely sure.  But if you take a look at this guy and think he's adorable, then you likely do NOT have Coulrophobia and you should be relieved.  It also makes me wonder about you, but that's a discussion for a different day. 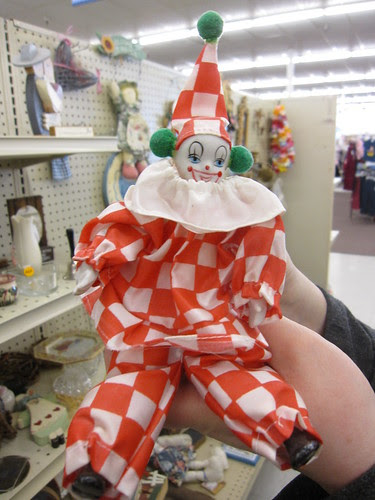 Until then, have a fabulous day and thrift on, my minions!  hehe. I've always wanted to say that.  In all seriousness, have a fantastic day and I'll see you on the flip side.
Posted by Carmen@Thriftstorehorror at 12:49 AM No comments:

You tend to find some of the craziest stuff a thrift store has to offer in the knick knack aisle.  I know there are tons of people who really dig knick knackery, but to me, a lot of them are like dolls and clowns.  Crazy creepy!

When I saw this particular specimen, I first thought maybe someone slipped her a roofie.  She is apparently oblivious to the book in her lap and her hands oddly at her sides (with freakish fingers by the way!!) - she's obviously out of it.  Or she saw something particularly mesmerizing in the sky... a UFO?...an intriguing skywriter?...Maybe just sleeping with her eyes open?  (shudder) 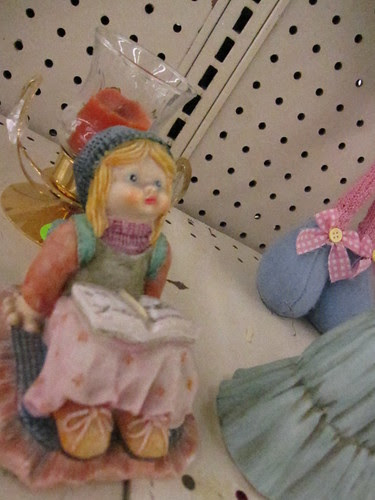 Actually, if you happened to be a child of the 80's, which I am, the first thing I thought of was The Dark Crystal.  If you haven't watched it, then you should do so.  I loved it as a kid!  (Love it slightly less as an adult, but it shaped my world view back then so it still ranks high).. anyway... if you HAVE seen it, you may remember the whole  "skeksis are the bad guys and creepily drain the essence from other creatures and create soulless minions" part."  If you haven't seen the movie, that sounds pretty effed up, but if you have, you totally get it!  anyhoodles... this knick knackery makes me think of that.  See exhibit A. : 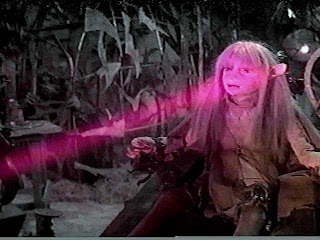 So there.  My epic cult movie nerd status is out there now, but I'm ok with that.  :)
I'm willing to bet I'm not the only one.

Posted by Carmen@Thriftstorehorror at 9:36 PM No comments:

This little contraption is called an incentive spirometer. You may be familiar if you’ve ever worked in healthcare or spent time in the hospital for surgery.  You may not know this, but by trade, I am originally a nurse and I can NOT think of any reason you would want to buy one of these at a thrift store!! 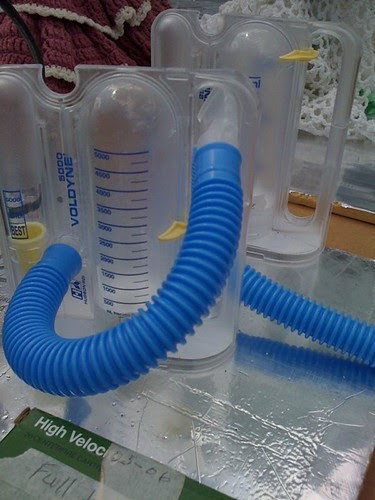 #1 - someone else's mouth has been on it.
#2 - it's nearly impossible to sanitize (very important for us with OCD tendencies!!!)
#3 - ewwwwww
#4 - if you are sick enough to require one of these,  you will get one in the hospital!  guaranteed!  so WHY in the hell would you feel the need to buy a used one from an anonymous stranger?!?

disclaimer:  this may be more abhorrent to me being of the medical field and as such, being somewhat more OCD than the general population, but in all honestly, if you had no medical background and  had never been hospitalized, have you ever been out thrifting and thought "hey!!  I need me one of these!!!!"

For reference, go HERE to find out the purpose of such contraption.

I am able to offer absolutely NO insight as to why one would feel the need to pick one of these up secondhand.  Then again... I guess that is the whole purpose of this blog.  There is a lot of unexplainable things out there in thrift store land.  But that's all part of the adventure!!!
Posted by Carmen@Thriftstorehorror at 12:38 AM No comments:


It has been well over a year since we have posted anything here on Thrift Store Horror.  A combination of life, conflicts and other things have made this once entertaining endeavor a complication.  Today, at work, a co-worker asked me if she should still keep an eye out for the type of insanity that one can only find on a thrift store shelf.  My first reaction was... "now is not the time..we have this big project at work, (insert more excuses here)" and later I thought about it.  Oh Hell No!  I thought.... I still love thrifting, and I still love snark, and I still enjoy typing my ramblings for a potentially imaginary audience, so I have decided YES!  Thrift Store Horror WILL live on!  Under a "re-arranged management" so to speak, my original vision for this creative outlet of sarcasm and snark will once again become a reality.

So, prepare yourselves, readers, for I am back and I am still as full of piss and vinegar as I always was and while my life is not necessarily any less chaotic, my sense of humor and drive is in much better shape than a year ago and I am ready to come back and amuse you all to the fullest extent of my ability.  I will make no promises about the regularity or the quality of my posts as this is an entertaining and not a pressure inducing venture for me, but I still whole hardheartedly encourage you to send me photos, stories, and anything else that tickles your funny bone.  Humor and laughter are all part of what makes life worth living, and I fully intend to spread both of those as much as I am able to.  So, that said.... give me a day or two to get my bearings (blogger has changed EVERYTHING in the last year!) and I will be back and better than ever!

Carmen
Posted by Carmen@Thriftstorehorror at 11:35 PM No comments:

I have thought long and hard about what to say about this and have come to the conclusion that it is best if I don’t say anything at all and leave it at that.  I’m leaving this one to all of you. 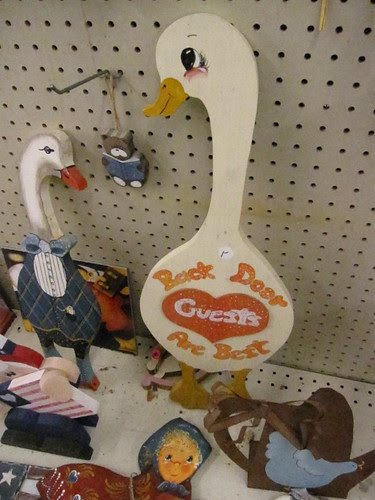 Posted by Carmen@Thriftstorehorror at 9:14 AM 2 comments:

Love Is In The Air

With Valentine’s day rapidly approaching,I thought it would be appropriate to show the “romantic” side of thrifttastic crap.  I’m noticing an alarming trend towards “prominent knockers on kissing figurines”. I’m not sure I know why, or what it means, but it scares me a little.  exhibit one: the “pasted on as an afterthought variety. 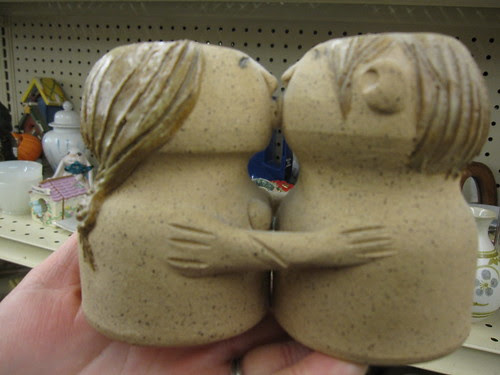 Exhibit two: The “seemingly innocent enough until you see the side view” variety.  Oh my….. 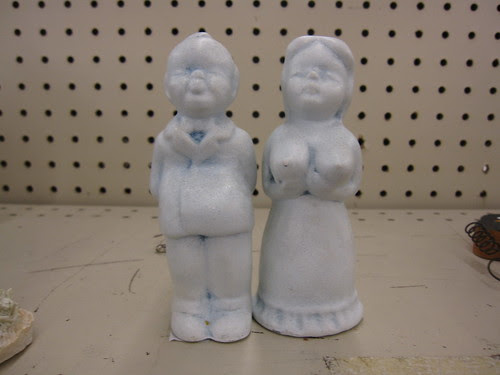 Ok, I’ll admit, not so seemingly innocent if you really look at it.  Honestly ladies, if you need both hands to hold them up, it’s time to invest in a better bra.

And from the side…. 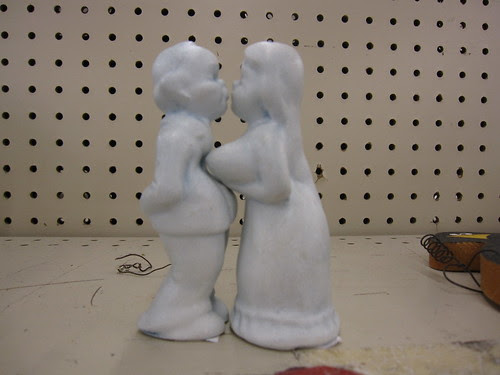 Nuff said.  (I should probably just leave it at that)

Posted by Carmen@Thriftstorehorror at 8:02 AM No comments:

No Black Eyed Peas, no light up box-head costumes (which were made locally by the way), no funny commercials and no football, but I present to you the Cabbage Bowl!  (Which is in no way related to the aforementioned Superbowl, obviously)
Yes, It is quite literally a cabbage bowl.  Not that I’m against cabbage, in fact I’m quite fond of it in many forms, (cole slaw anyone? egg rolls?) but I can’t for the life of me imagine the need for a life sized ceramic cabbage container.  Collectors may differ, but I’ll stick with the Superbowl.  Way better parties.  (and commercials) 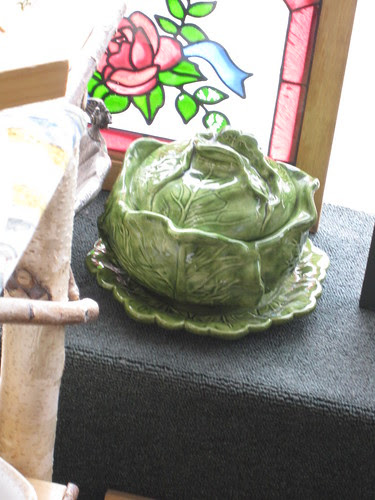 Older Posts Home
Subscribe to: Posts (Atom)
If you've ever frequented a thrift store or a "junk shop" you know that can find unexpected treasures, but what about the things you wish you hadn't found, or the most amusing finds? Well, that's where we come in. We aim to showcase our most absurd and appalling thrift store discoveries and hope that you will send us yours! So grab your camera, even your cell phone camera, and get thrifting! Email us at thriftstorehorror (at) gmail (dot) com! Be our fan on Facebook! 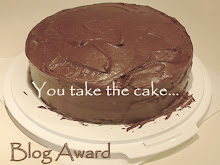 From Kari who is Super Awesome!!